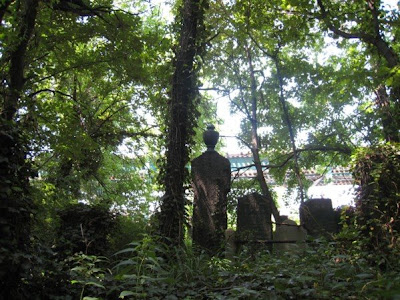 It has come to the attention of the plaintiffs in the Bayside Cemetery Litigation (www.baysidecemeterylitigation.com) that another incident of mausoleum vandalism and grave desecration occurred at Bayside Cemetery in Ozone Park, Queens. Bayside Cemetery is owned and operated by Congregation Shaare Zedek in Manhattan (www.sznyc.org).

Some photographs of the previous 2003 grave desecration and re-interment efforts led by volunteers can be found at http://photos.baysidecemeterylitigation.com/GallerySlideshow.aspx?gallery=153763

In December 2008, it was reported to the plaintiffs that sometime in November 2008, more mausoleums at Bayside Cemetery were broken into and desecrated. Crypts were destroyed, coffins smashed, and human remains were scattered on the ground. Some amateur photographers documented the situation at Bayside Cemetery on January 4, 2009. Their photographs can be viewed at http://citynoise.org/article/8696

The following are some readily available citations and excerpts documenting the potential dangers of exposed human remains at Bayside Cemetery.

"Numerous infectious bacterial and viral diseases affected historic populations, many of which were catastrophic to 18th, 19th, and early 20th century populations in the United States. Although it is not likely that vestiges of these diseases could have survived over the years in an historic grave setting, it is possible, especially under certain circumstances […]"

"Although the risk of acquiring disease from human remains decreases rapidly with time and decomposition and loss of soft tissue, if an intact metal casket is encountered, it is possible that any communicable disease afflicting the deceased in life, and possibly causing his or her death, could be present in preserved soft tissues."

"Bacterial diseases were prevalent in most North American populations prior to the 20th century and were probably the leading cause of death during that time. Anthrax, tetanus, and tuberculosis are resilient bacteria, and special concern about exposure may be warranted with these diseases. […] anthrax spores can last for years, […] tuberculosis is especially hardy, and the United States National Library of Medicine claims that tetanus can remain infectious for more than 40 years."

"Viral diseases were also prevalent in most North American populations throughout the historic period. Viruses are completely dependent on living cells for reproduction. Although the anatomical structure of viruses make it unlikely that they could survive without living cells as hosts, they do have the potential to affect individuals excavating historic cemeteries."

"Smallpox is probably the most significant potential health risk arising from the excavation of historic cemeteries. The smallpox virus has essentially been eradicated and the vaccination is generally no longer performed, thus the release of smallpox organisms could be catastrophic."

"Chemical hazards associated with historic cemetery excavations include fluids used in embalming and materials used in coffin construction and decoration. In the United States, the mid-19th century saw the rapid rise, spread, and acceptance of a need for the body to be preserved as a necessary preliminary to interment. […] Early embalming fluids included alcohol, zinc and mercuric chloride, creosote, arsenic, sulfuric acid, and turpentine. Some of these substances pose little threat to individuals excavating or analyzing materials from historic cemeteries, but others have the potential to be quite hazardous. Many never degrade into harmless by-products and remain with the coffin and skeletal material or seep into the surrounding soils. Historic embalming practices are an issue for archaeologists excavating and analyzing remains from historic cemeteries."

"Arsenic is toxic and persistent, and the elemental form never degrades into harmless by-products. The arsenic that endures today in cemeteries can potentially harm archaeologists or others working in cemeteries, or individuals drinking contaminated ground water."

"Crypt burials or later burials, especially in lead or solid wood coffins may also result in soft tissue preservation. This may include hair, fingernails and skin. These must be treated with caution for health and safety reasons."

"We’re talking about some pretty serious and nasty stuff. The main ones that come to mind are anthrax, botulism, tuberculosis, smallpox, Hepatitis A, cholera, typhoid. All the sorts of friendly organisms that you really don’t want to have hanging around, or to be resurfaced, or to move into an ecosystem via movement in groundwater."

"[…] we believe that in order to survive the virus must have a cellular host to be viable. Unfortunately that doesn’t appear to be the case. We have for instance, in the United Kingdom, resurfaced inactive smallpox spores which are 150 years old. Other viruses haven’t been investigated so this area is even more deficient in understanding than the bacterial side of things."

"Well as I said, the information that we have is quite scant but for instance the Bacillus anthrax – so that’s the bacterium that causes anthrax – we know that it can survive for 54 years in surface soil and it’s been found 200 years old in bone which has been buried only at a very shallow depth. The typhoid bacterium – Salmonella typhi – we know that it can survive 730 days in soil, 616 days in seawater and we’ve traced it already for 0.9 metres in soil. The issue of tracing how far it can move is very embryonic, we know very little indeed. The tuberculosis bacterium – Mycobacterium tuberculosis – 213 days it’s survived in soil but there’s an interesting case from Canada where some ill-fated sailors of the Franklin Expedition were exhumed and they’d been frozen for 138 years since death and in one of them they found tuberculosis bacteria, it wasn’t active but it was there. They were also able to culture something from the bowel of one of those sailors so that’s 138 years old."