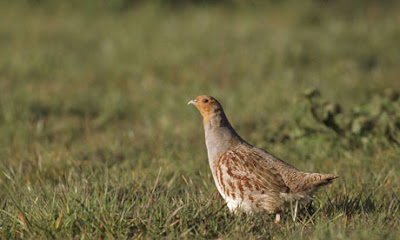 A grey partridge: Once common on British farmland, numbers have fallen by 79% since 1980. Photograph: RSPB

Almost half of common European birds are heading towards "continental extinction", a new report warns today.

The alarming rate of decline revealed in the report has fuelled fears for the future of many of the continent's birds, including the grey partridge, lesser spotted woodpecker and crested lark.

Almost half (45%) of Europe's common birds have declined over a 26-year period according to the report, the State of Europe's Common Birds 2007.

The report's analysis of 124 of Europe's common birds, published by the European Bird Census Council, RSPB and BirdLife International, has revealed that 56 species of Europe's birds declined across 20 European countries between 1980 and 2005.

Of the 10 common birds showing the greatest declines, five are farmland birds such as the crested lark, which declined by 95%, and the lapwing, whose numbers more than halved. Seven are regular nesting birds in the UK, including the lesser spotted woodpecker, which has suffered an 81% decline, the grey partridge, a 79% decline, and turtle dove, whose numbers are down by 62%.

A recent study by the Game and Wildlife Conservation Trust revealed that the grey partridge faces additional pressure in the UK from hunters as they are often mistaken for the more common red-legged partridge.

Mark Avery, the RSPB's conservation director, said: "Seeing a countryside increasingly bereft of familiar birds, like the grey partridge, turtle dove and lapwing, is deeply worrying. These declines are so severe that in Europe they are considered to be heading towards continental extinction – it is only the sizeable populations of both birds in Asia, which prevents them from being considered at risk of global extinction."

Increasing intensification of farming is thought to be the main cause of the overall 44% decline among Europe's 33 common farmland birds.

In contrast, 29 species of bird, including the hawfinch, raven and common buzzard, have increased across Europe, and the populations of a further 27 are stable.

The study was led by Richard Gregory, the chairman of the European Bird Census Council, and head of monitoring and indicators at the RSPB.

He said: "Unsurprisingly, some of the 10 species, such as the collared dove, that have shown the greatest increases in Europe are birds that don't rely on specialist habitats and have taken advantage of new opportunities."

"The increases in buzzard and raven are encouraging as the European populations of both birds appear to be bouncing back after decades of unwarranted persecution."

Gregory added "We know that birds can be excellent indicators of change and although the overall picture is bleak, there are signs of recovery and we have the knowledge to help many of these birds.

The 10 species that have shown the greatest decline in Europe between 1980 and 2005 are:

The species that have shown the greatest increases between 1980 and 2005 are: