In recent years, a small number of South Asians have made unsuccessful runs for elected office. But in the 25th Assembly District in Queens, where some five percent of registered voters are South Asian, one Indian-American has garnered repeated wins. NY1's Shazia Khan filed the following report. 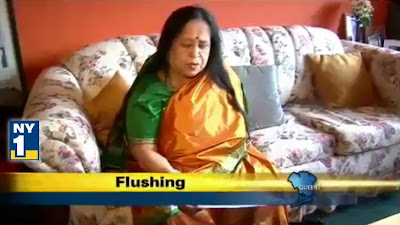 She's affectionately known as the "lady with the sari" in Democratic circles. And in an apartment turned office in Flushing, Uma Sengupta's re-election campaign is underway.

Sengupta serves as one of several Democratic leaders of the 25th Assembly District which covers parts of central Queens. She was first elected in 2002 and has held the office for four terms. The community organizer and educator who immigrated from India in 1970 is at present the only South Asian in a local elected office.

As a district leader, Sengupta's responsibilities include organizing voter registration drives and votes on party endorsements.

Numerous awards and pictures with some of the country's top Democrats are displayed on the walls of her office, just two doors down from her three bedroom condo.

A personal goal of Sengupta is to see an increased participation of South Asians in government -- everything from registering to vote to running for political office.

Though she would like to see more South Asians in elected office, Sengupta however is supporting Congresswoman Carolyn Maloney in the upcoming race for the 14th District U.S. Congressional seat and not her fresh face challenger, Indian-American Reshma Saujani.

As for herself, she says has no plans to run for higher office.

"Because the things which I'm doing it, I'm quite satisfied with that one," Sengupta said.

She says she hopes other South Asians continue to aspire for more in government.