Today at New York City Hall, scores of community members joined elected officials and organizational leaders to rally and call on the United States Senate to stand up to Wall Street lobbyists and pass the strong financial reforms that are needed to fix our broken economy and prevent another economic crisis Big banks and Wall Street financial firms have spent more than $500 million, or $1.4 million a day, since the beginning of last year in lobbying and campaign contributions, a distorting influence that will only be worsened by the Supreme Court’s recent Citizens United ruling. 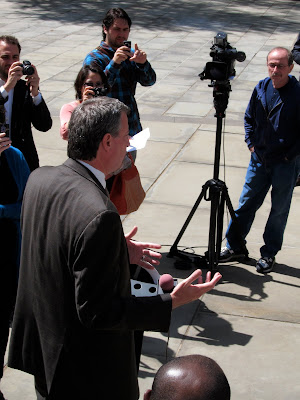 Public Advocate de Blasio spoke forcefully in favor of the corporate governance reform pieces of the Senate Banking Committee bill that will soon come to a floor vote “Real financial reform is not bad for businesses, it is a solid investment in the future of our economy,” said Public Advocate Bill de Blasio “I understand the critical value Wall Street provides to our City and that is exactly why I believe we need to rein in speculative financing practices. Real financial reform will create more stability in the financial system and will protect investors, government budgets, pension funds and everyday New Yorkers.”

Queens homeowner Jean Andre-Sassine described his two-year ordeal attempting to get his bank to talk with him about modifying his predatory loan “The broker and lender tricked us when we took out this loan, and it has been nothing but trouble for me and my family." said Andre-Sassine "A new Consumer Financial Protection Agency will protect families like mine from financial rip-offs and exploding mortgages If after all this pain and suffering we still cannot pass these basic reforms because of powerful bank lobbyists, I fear for our democracy itself.”

Neighborhood Economic Development Advocacy Project (NEDAP) Co-Director Josh Zinner called on the Senate to stand firm against the lobbying deluge and improve the bill on the Senate floor “The SEC’s recent action against Goldman Sachs is just the tip of the iceberg -- greed and corruption are pervasive and institutionalized in the financial services industry, and now the financial giants are using every tool in their arsenals to gut sensible financial reform,” said Zinner “Enough is enough The Senate must stand strong and resist the industry's efforts to riddle this bill with loopholes Further, the Senate should vote to make consumer protection truly independent and not subject to a veto by the same banking regulators who failed to prevent this crisis.”

Tamara Draut, Vice President of Policy and Programs for Demos, placed the financial reform bill in context of protecting and reviving a strong middle class in America “For decades, American families have been feeling the squeeze on all sides, and this crisis is the ultimate consequence of the deregulatory economic philosophy that championed the rights of predatory lenders over those of economically-strapped families,” said Draut “This financial reform package is critical to the survival of the middle class through its strong provisions that will help restore a level playing field and ending ‘Too Big to Fail’ bailouts.”

The Americans for Financial Reform coalition is specifically calling on the Senate to:

The Senate is expected to take up the bill for debate on financial reform as well.